How to Comply with Off-Payroll Rules in the Private Sector 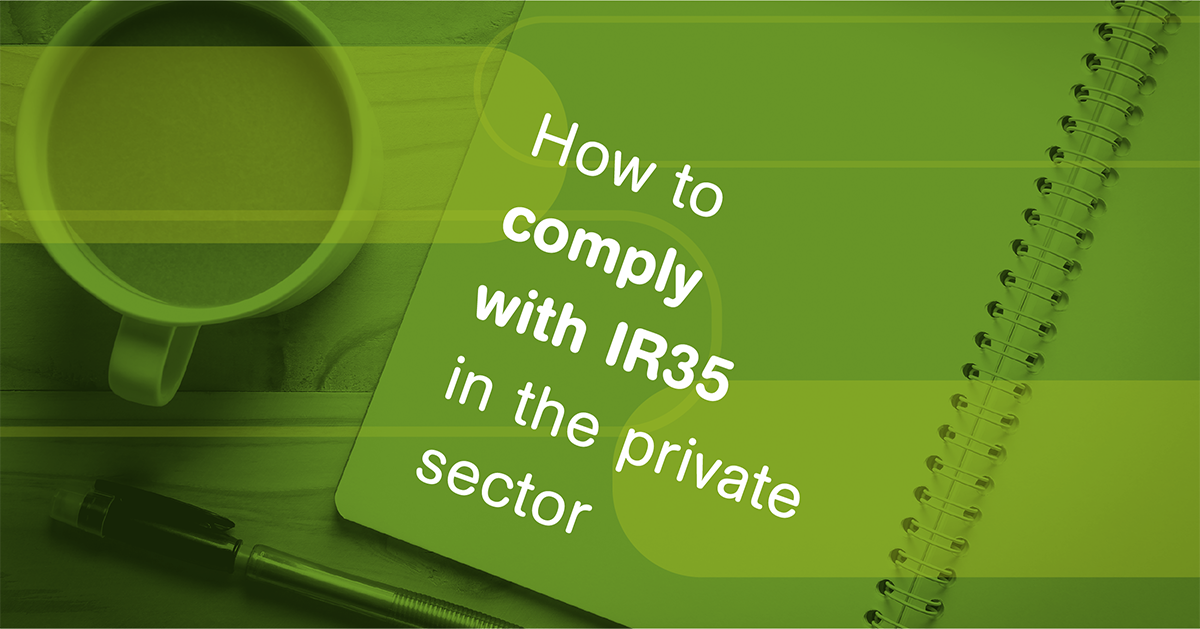 Off-payroll working laws, known as IR35, have had a lot of publicity in recent months, with a few key challenges in the public sector. Last March, TV presenter Lorraine Kelly defeated HMRC at her tax tribunal after successfully appealing her tax bill of £1.2 million. Presenter Kaye Adams won a similar appeal for her tax bill of £124,000 in April. Most recently, Helen Fospero won her case at the tax tribunal over an £80,000 tax bill when she was working as a guest TV presenter on a contract basis for ITV.

However, in September 2019, HMRC won a First Tier Tribunal case concerning the employment status of three BBC presenters who used personal service companies. With great confusion over the legislation, we take a look at what IR35 is and who it will affect.

IR35 was first introduced in 2000 as a way of reducing tax avoidance, ensuring that companies don’t avoid employment tax obligations by using ‘contractors’ rather than employees.

As announced by Philip Hammond in the 2018 Autumn Budget, IR35 will be extended to the private sector from 6 April 2021. The new rules will change the way consultants and contractors working for medium or large businesses are classified for payroll purposes.

A medium or large business is defined as:

What is defined as “off-payroll working”?

As HMRC explains: “A worker is involved in off-payroll working when they work for a client through their own intermediary, often a personal service company (PSC), but would be an employee if they were providing their services directly.”

Put simply, off-payroll rules mean that, regardless of the structure they work through, an individual who works in a similar way to a company employee will pay similar income tax and National Insurance Contributions as an employee.

How will IR35 impact income?

Those providing their services through a PSC may become reclassified as employees under the new IR35 rules. This will have a significant impact on income and benefits, as those found to be within the new legislation will have income tax and National Insurance Contributions deducted by PAYE, rather than reporting their income through tax returns.

Where off-payroll workers could previously make tax savings by receiving payment to their PSC, from which they could then draw dividends from, they will now find themselves paying additional tax through PAYE.

When will IR35 in the private sector come into force?

IR35 was due to be extended into the private sector from 6 April 2020, with changes to the operation of the off-payroll working rules only applying to payments made for services provided on or after 6 April 2020, according to an update from HMRC.

However, as of 17 March 2020, these IR35 reforms have been delayed until 6 April 2021 due to coronavirus, which will offer some relief during these uncertain times.

How to plan for IR35 in the private sector

It’s crucial that you determine whether this will affect you and your business as soon as possible so you can plan for any changes.

The first step is to use the Government’s Check Employment Status for Tax (CEST) service to determine whether a worker should be classified as employed or self-employed for tax purposes.

The Government has also provided the following guidance on how businesses can prepare for reform:

Need more help on off-payroll tax rules? TBL Accountants can help. Please get in touch with our team for more guidance on IR35 in the private sector.