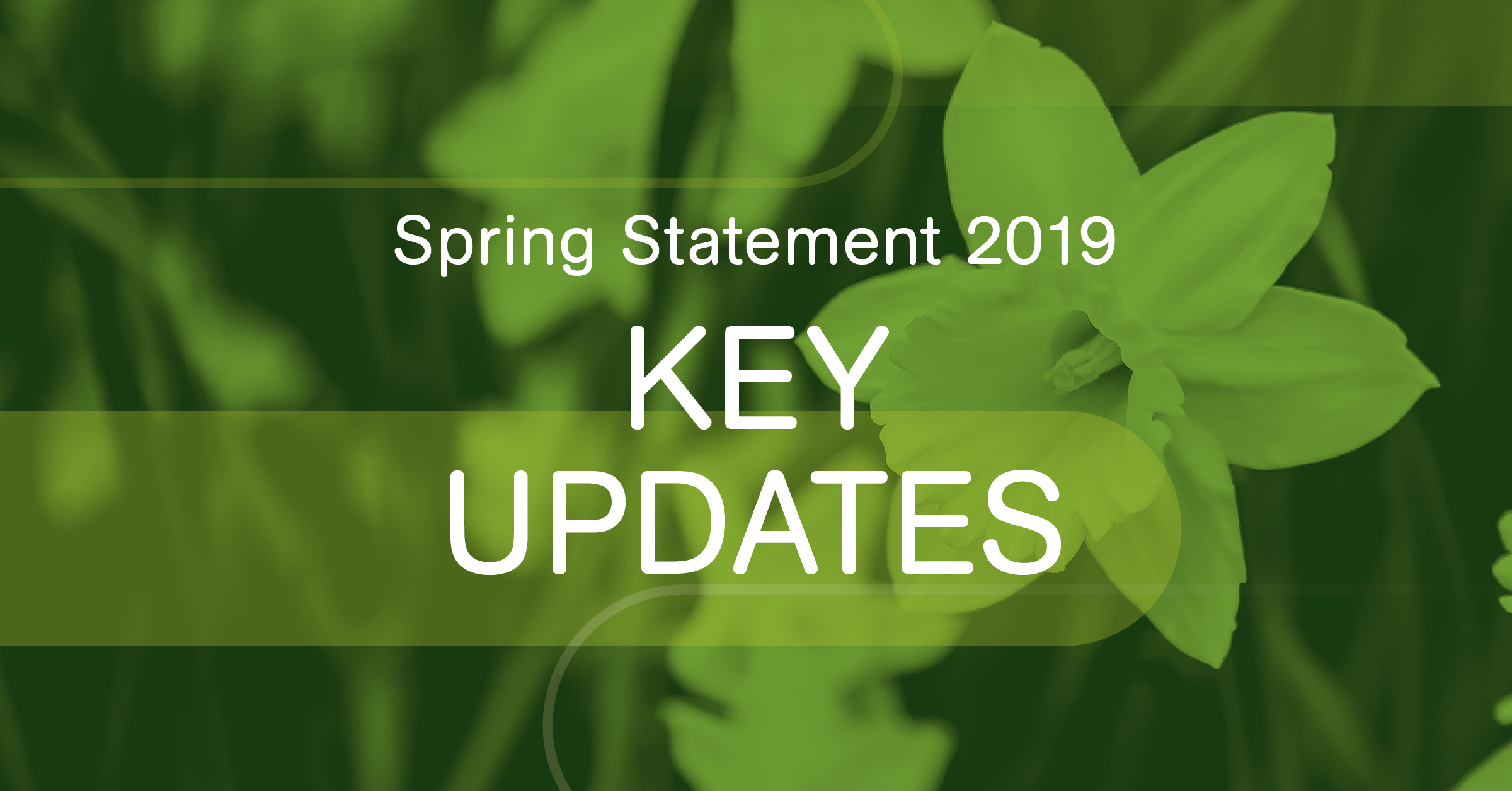 On 13 March 2019, in the shadow of the ongoing Brexit negotiations, Philip Hammond, the Chancellor of the Exchequer, presented the Spring Statement in the House of Commons. Unlike the Autumn Budget, the Spring Statement does not include any major tax or spending changes.

In his Statement, Mr Hammond provided an update on Britain’s economic growth as a response to the Office for Budget Responsibility’s (OBR) forecasts on public finances and the Autumn Budget 2018, all with the Brexit “cloud of uncertainty hanging over our economy”.

He also introduced new initiatives and investments in infrastructure, housing and technology designed to help businesses and individuals prosper in the current financial climate.

Early in the Spring Statement, the Chancellor confirmed that a 3-year Spending Review will be held, to conclude alongside the Budget. This will include budgets for resource spending if a Brexit deal is agreed.

Economy at a glance

As stated by the Chancellor, this is the “longest current unbroken quarterly growth run of any G7 economy”, with 9 consecutive years of growth. The OBR has also forecast further growth over the next 5 years. Growth forecasts for this year are down to 1.2% from 1.6%, but as previously forecast, the economy is expected to grow 1.4% in 2020.

Borrowing has already been reduced by four-fifths since 2009-10, and, as “less borrowing means less debt”, Mr Hammond announced that debt is lower than it was forecast to be at the 2018 Autumn Budget, falling to 82.2% of GDP next year.

The announcement revealed some positive statistics in employment at a time of “historic lows” in unemployment. The lowest since 1975, the current unemployment rate is 4.0%. Moreover, in 2018, 96% of employment growth was in full-time employment. Mr Hammond also noted that employment will rise steadily over the next 5 years. By 2023, the OBR has forecast that 600,000 new jobs will be created. Wage growth is also expected to be 3% or higher every year and continue to grow faster than inflation – their fastest growth in over a decade.

A new £3 billion Affordable Homes Guarantee Scheme has been announced, which will support the delivery of 30,000 new homes. Plus, £717 million has been allocated from the £5.5 billion Housing Infrastructure Fund to support up to 37,000 new homes in West London, Cheshire, Didcot and Cambridge.

Building on the Clean Growth Strategy and 25 Year Environment Plan, the introduction of the Future Homes Standard will ensure that all new homes will have low-carbon heating and world-leading levels of energy efficiency from 2025.

Continuing the Government’s commitment to a clean economy, Mr Hammond expanded on issues he raised in the Autumn Budget. A Business Energy Efficiency Scheme has been launched to help small businesses save money and cut their carbon emissions.

With regards to Making Tax Digital, it was confirmed that it will not be extended to buy-to-let landlords or businesses over the next year: “The focus will be on supporting businesses to transition and the government will therefore not be mandating MTD for any new taxes or businesses in 2020.”

Health and the environment

This year’s Spring Statement also considered the link between biodiversity and economic growth. As such, the Environment Bill will also ensure that new developments, while essential to the growth of the economy, will have to offset impacts on local habitats.

Meanwhile, £79 million funding for a new supercomputer, ARCHER2, will help Britain contribute towards vital discoveries in medicine and climate change. Plus, £81 million has been invested in Extreme Photonics and £45 million has been allocated for Bioinformatics research.

Undoubtedly, Brexit is currently at the centre of Britain’s focus as it gets closer to 29 March 2019, with the Prime Minister’s Brexit deal rejected.

Mr Hammond warned of the threat of a no-deal Brexit, with a disruptive blow to the UK economy:

“Leaving with no deal would mean significant disruption in the short and medium term and a smaller, less prosperous economy in the long term, than if we leave with a deal. Higher unemployment, lower wages, higher prices in the shops. That is not what the British people voted for in June 2016.”

According to the OBR: “Government on track to meet fiscal targets, with £26.6bn headroom against the structural borrowing target, but unlikely to meet its objective to balance the budget by 2025.”

So, should MPs vote to leave the EU with a deal, the Government could have up to an extra £26.6 billion to spend to help boost the economy.

Mr Hammond also used the Spring Statement to ensure that international visitors would still see Britain as a major player for business. Not only will landing cards begin to be abolished, but citizens of Australia, Canada, Japan, New Zealand, Singapore, South Korea and the US will be permitted to use e-gates at UK airports and at Eurostar terminals from June 2019.

While the Spring Statement shared positive updates on the UK economy, employment and housing investments, doubts over the Brexit deal have ultimately led to the short-term slowdown on the growth of the economy as the Chancellor needs to mindful of resources needed to secure Britain’s economic future.

What will be covered in the 2019 Autumn Budget? Check out our latest Budget article for our thoughts.